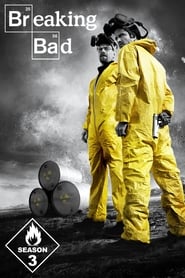 The third season of the American television drama series Breaking Bad premiered on March 21, 2010 and concluded on June 13, 2010. It consisted of 13 episodes, each running approximately 47 minutes in length. AMC broadcast the third season on Sundays at 10:00 pm in the United States. The complete third season was released on Region 1 DVD and Region A Blu-ray on June 7, 2011.